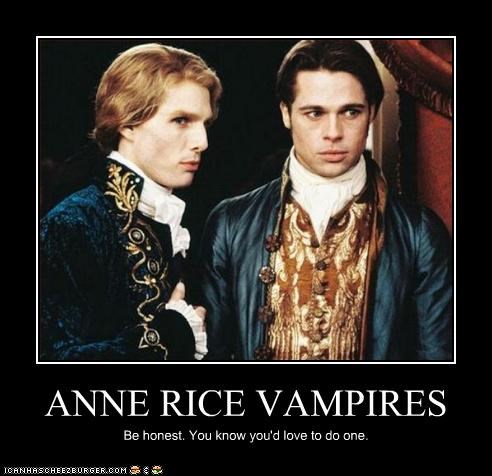 The premise:
Anyone who is a true fan of Anne Rice knows that her books are awesome AND that they're books that scream to be read more than once. I myself have read Books One through Four of The Vampire Chronicles twice. Actually I've read Book Three, Queen of the Damned, four times. It is my favorite book.

For the above reasons, I have created this challenge. I realize that Anne won't live forever, but she's still writing and I'm WAY behind on reading the books she has already written. So yeah, never-ending is the name of the game.

I hope you will join me!

This is really a long term challenge where we read or reread Anne Rice's works.. so no real deadlines. You can set your own personal deadline or goal. For instance, I'm thinking about challenging myself to read three of her books yearly, or I might change that. Something to consider. Your goals can always change. To help things along, we may have some read-a-longs here and there. Anything goes with this challenge.

If you'd like to join me on this journey through the fantastic works of Anne Rice, please sign up in the linky below. Be sure to link to your goals list, not just your blog.

You can grab the button below with the handy grab code.


THE COMPLETE WORKS OF ANNE RICE