I have been a fan of James A. Michener ever since reading Chesapeake in high school.  I have many of his books, but I never seem to get around to reading them.  They are usually quite long so it can be a daunting task.  Consequently, I decided to start a Michener challenge! This will be a perpetual challenge, meaning no time constraints.  Feel free to join whenever it suits your fancy.  The challenge will officially start on January 1, 2010, but feel free to start sooner if you so choose.  I am including a Mr. Linky for sign up and I will post another Mr. Linky starting after January 1st for you to post your reviews and/or reflections.  Also, I have provided a list of all Michener's works in the post prior to this (check in the blog archive list for easy access).  I hope you enjoy the challenge!

Updated note: As you can see, this challenge has been hanging around since 2010. I have not done very well keeping up with it, but I intend to change that.

The original sign-up linky and the review linky are below.

A list of Michener's works are at the bottom of this page.


Mister Linky's Magical Widgets -- Auto-Linky widget will appear right here!
This preview will disappear when the widget is displayed on your site.
If this widget does not appear, click here to display it.

Here is a list of the works of Michener. Each section is in order by publication date. I have included fiction, non-fiction and collections, but you can choose the area or all areas you want to focus on in the challenge. I will probably focus primarily on his fiction. Please let me know if any titles are missing and I will be glad to add them. (Titles in red are the works I have read)

Collections:
Tales of the South Pacific (1948)
Return to Paradise (1950)
Rascals in Paradise (1957)
Selected Works (1976)
The Watermen: Selections from Chesapeake (1979)
Great World War II Stories (1989) (with Nicholas Monsarrat and Nevil Shute)
Creatures of the Kingdom: Stories of Animals And Nature (1993 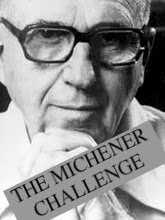