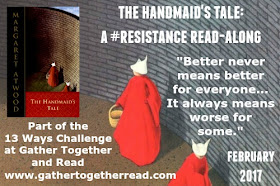 I'm wondering if now was a good time to read a book like this...because it scared me, and I had a weird feeling in the pit of my stomach throughout reading it. I now realize that it's an important read because it demonstrates why we must fight to keep the freedoms we have won. We must not let our status as women be demoted to that of the women in this book. We must not let the tenets of our Constitution (United States) be trampled upon. The freedom of speech, of the press, to address grievances. The separation of church and state.

I think the fear really hit me when I read this passage (p. 174, Ch. 28). "It was after the catastrophe, when they shot the president and machine-gunned the Congress and the army declared a state of emergency. They blamed it on the Islamic fanatics, at the time."

Then, when Offred (the woman she was in the past) goes to buy cigarettes and is told that her Compubank card is invalid. Then she, along with the other women who work with her, is let go from her job. She finds out later that day from her friend, Moira that "women can't hold property anymore. It's a new law."

Sucker punch. I pride myself on my independence, as I'm sure many women do, whether they're married (or in a relationship) or not. Could this happen? Is this what insidious plan some government officials might have in mind for women?

This is probably my favorite quote from the novel. "Better never means better for everyone...It always means worse for some." The commander is the one who says this to Offred. Its meaning echoes the sentiments of one who says, "Make American great again." The quote is the Commander's justification for Gilead existing when Offred asks why it is such an awful society for women. As in most dictatorships, the elite believe the change they caused were for the public good, no matter how many people suffer as a result. Again, sound familiar?

It is truly alarming when a dystopian novel, a work of fiction, may be foreshadowing what's to come if the state of our country continues to proceed down the path it is currently on. It's a cue to us that we cannot be complacent. As many of us know from history, people never believed that things could get as bad as they did during the Holocaust. They never imagined that people would be imprisoned and killed just because they were Jewish, because they didn't fit the Arian mold that Hitler coined as the supreme human.

Complacency. We cannot smugly sit by and think, "That could never happen" because it very well could.


Thanks for reading along!