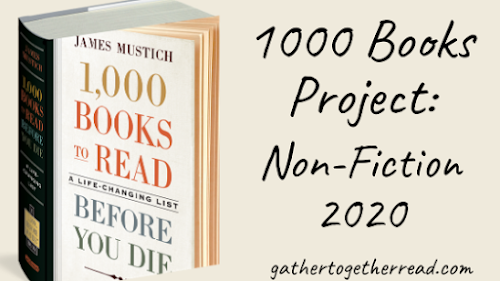 I've had to make the executive decision to change up our reading schedule for the project. Some of you may be aware of my move this August, if you follow at my readathon blog, Seasons of Reading. Yes, I'm moving house in August. We live in Nashville, Tennessee (my mom, my sons, and I) and have wanted to move back to my hometown (Midland, Michigan) for a while now since my sister and her family still live up there. We planned to move after both boys were graduated, but my younger son (17) started home school last year so we decided to move sooner. Plus, my older son (who just graduated) is going to Central Michigan University in the fall. We originally were planning on moving by the fourth week in August, as my son was starting school on August 31, but now with the pandemic, they have moved the start date to August 17 (as many colleges are doing), which means we have to move by August 10 to get him moved into the dorms before school starts. Needless to say, the remainder of June and the month of July are going to be very busy with packing, moving prep, etc. Yikes!
What does this mean for our read-alongs? I'm extending Sagas of Icelanders through August 31. In Cold Blood will be September (and into October, if needed). I wanted it to be a Banned Books Week read in September anyway. Bury My Heart at Wounded Knee will still be in November (into December, if needed), in honor of National American Indian Heritage Month.
I have updated the official reading schedule post here. The Sagas of Icelanders schedule is also updated here.
I hope you will still be able to join me for the read-alongs, and thanks for bearing with me. ❤