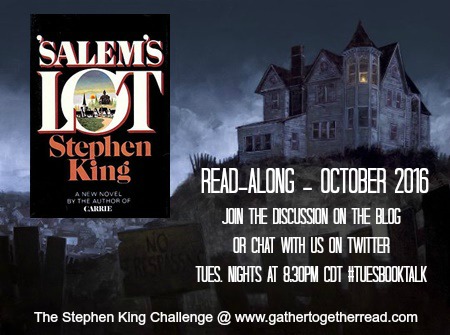 Potential spoilers ahead if you have not read the book.

Yes, I'm a week late with this. I apologize. My reading did not go as planned, as usual.

What a book! I can't believe I waited so long to read this.

I have to mention that I was listening to Bram Stoker's Dracula on audio in conjunction with reading this book (my second reading of Dracula) and I found it interesting to see where SK was inspired by Stoker's tale in his story.

For instance, Susan is a kind of parallel with the three vampire women that live with Dracula in his castle. Wow...when Ben had to kill her...that was quite a moment.

Barlow himself could be Dracula. The way SK describes him is fairly similar to how Stoker describes Dracula. Perhaps somehow Dracula did survive being killed. There have been many plausible reincarnations over the years. And so, Dracula takes on the alias Barlow. Outlandish? Not in my opinion.

One of my most favorite parts was the end. I know that's kind of weird, but I liked the part where they were telling of occurrences in and around Jerusalem's Lot and then Ben and Mark go back and set fire to the town to draw the remaining vamps out of their hiding places. Do you think they were eventually able to get them all? I like to think so...and since there isn't a sequel (although you never know...look how long SK took to write a sequel to The Shining), perhaps they did.

This really was a great book, and for being King's second published novel, I can see why his books led him to fame. He really is a genius storyteller and he knows how to deliver the scary, often in a subtle, sneaky way that you're not quite prepared for, but when it happens, it's golden.

I'd like to thank those of you who read along with me and for hanging in there. I'll be sure to visit your posts/reply to the comments you've already left.

Now we can mark one more off our Stephen King Challenge lists!